Mid-century modern design is having a moment—and for good reason. The style, which originated in the middle of the 20th century, is characterized by clean lines, organic shapes, and a focus on functionality. Plus, it looks pretty darn good, too.

If you're hoping to give your living room a mid-century makeover but don't want to break the bank, never fear. With a little creativity and some elbow grease, you can achieve the look you desire without spending a fortune. Here's how:

When it comes to mid-century design, less is more. That means you don't need to go out and buy all new furniture; often, simply rearranging what you already have will do the trick. Get rid of any clutter and choose pieces that are clean and simple in design. A sofa with straight lines, for example, will be more in keeping with the mid-century aesthetic than one with lots of frills or embellishments. You can also look for vintage pieces at flea markets or thrift stores; just make sure they're in good condition before bringing them home. This is the Ladybird Sofa at Couch Potatoes. It's a mid-century marvel, with a frame consisting of simple shapes, and wooden tapered legs. The Ladybird Collection is very popular because its appearance can perfectly assimilate to several different styles.

One of the hallmarks of mid-century design is a focus on natural materials like wood and stone. If your furniture is looking a little tired, give it new life by stripping it down to its natural finish or sanding and staining it in a dark wood tone. You can also add accents like stone coasters or wooden bowls to bring a touch of nature into your space. And if you really want to go all out, consider installing hardwood floors or exposed brick walls—both of which are characteristic of mid-century homes. The Oltorf dining set at Couch Potatoes has a timeless style with a neutral walnut finish.

Another key element of mid-century design is an emphasis on light and airy spaces. To achieve this look in your living room, start by painting the walls in a light neutral color like white or beige. Then, add plenty of windows to let in natural light (if possible) and use lamps sparingly to avoid making the space feel too dark or cramped. Finally, declutter surfaces like coffee tables and bookshelves so that they appear open and airy rather than cluttered and cramped. The Rebel Collection at Couch Potatoes is a great example of blending the mid-century modern style with a room that is light and airy. The dark gunmetal knobs and the deep, dark walnut finish of the wood would greatly benefit from a light and airy space. The furniture also is perfect for decluttering with all of its drawers for storage.

When it comes to mid-century modern design, less is more. That means sticking to a relatively simple color palette instead of going crazy with patterns and prints. Black, white, gray, and beige are always safe bets—but you could also try incorporating one or two accent colors like yellow or green. Just make sure whatever colors you choose to complement each other and don't clash too much. 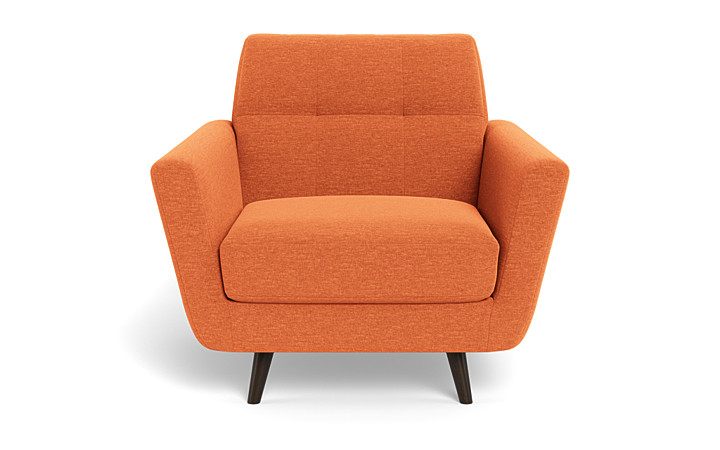 With a little bit of effort (and maybe even less money than you think), you can easily achieve the mid-century modern living room of your dreams! Just follow these simple tips and let your creativity run wild—before long, you'll have created a stylish space that would make Don Draper proud.

At Couch Potatoes, we offer a wide variety of sofa styles. One of our most popular is a mid-century modern frame, featured on several of our own pieces that we make locally in Austin, Texas. If you're a fan of the mid-century style, come check out Couch Potatoes.

Added to your cart: